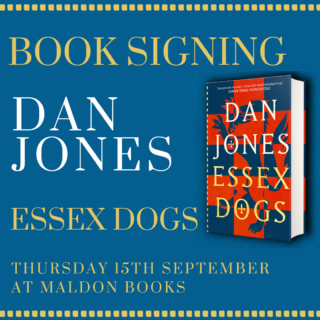 We’re absolutely thrilled to welcome historian and bestselling author, Dan Jones, to our bookshop this September!

Maldon Books is delighted to be hosting a book signing with Dan Jones, celebrating the publication of his fictional debut, Essex Dogs, the explosive first instalment in an epic new trilogy set during the Hundred Years’ War.

July 1346. The Hundred Years’ War has begun, and King Edward and his lords are on the march through France.

But this war belongs to the men on the ground. Swept up in the bloody chaos, a tight-knit company from Essex must stay alive long enough to see their home again. With sword, axe and longbow, the Essex Dogs will fight, from the landing beaches of Normandy to the bloodsoaked field of Crecy.

There’s Pismire, small enough to infiltrate enemy camps. Scotsman, strong enough to tear down a wall. Millstone, a stonemason who’ll do anything to protect his men.

Father, a priest turned devilish by the horrors of war. Romford, a talented young archer on the run from his past. And Loveday Fitz Talbot, their battle-scarred captain, who just wants to get his boys home safe.

Some men fight for glory. Others fight for coin. The Essex Dogs? They fight for each other.

Dan Jones is the New York Times bestselling author of Powers and Thrones, Crusaders, The Templars, The Plantagenets, Wars of the Roses, and Magna Carta. He wrote and presented the popular Netflix series Secrets of Great British Castles, and has an exclusive deal with Sony Pictures Television to produce and develop historical TV series, including adaptations of his books.

Dan will be signing copies of Essex Dogs at our bookshop on Thursday 15th September. Admission is completely free, though if you would like to preorder a copy of Dan’s book ahead of the event, please select the ticket option including a book on our EventBrite page here, and we’ll have your copy ready for collection at the event.

If you have any queries regarding the event, please do not hesitate to get in touch with us.