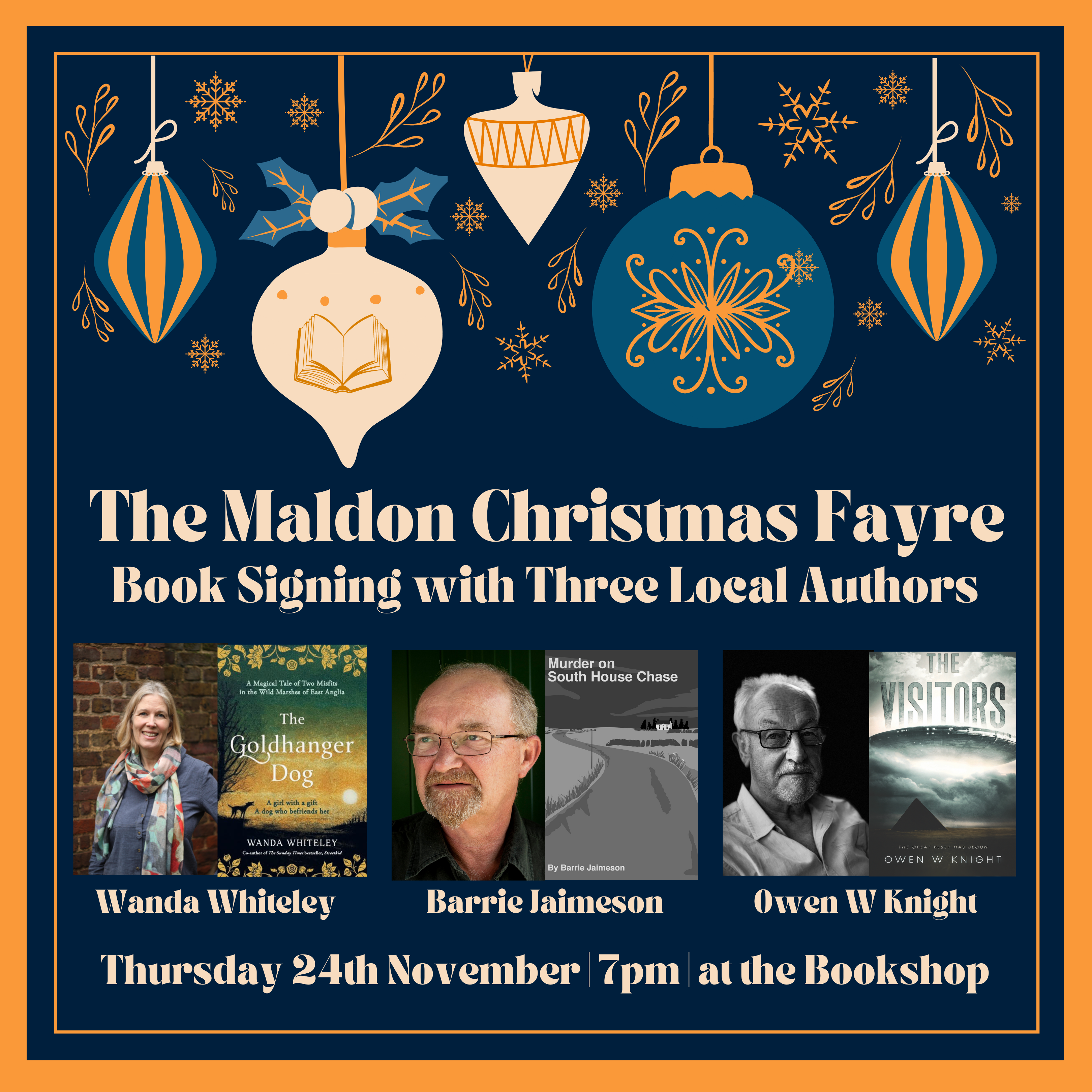 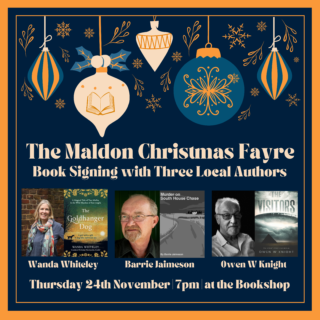 Join us for a very special evening on Thursday 24th November, where we’ll be joining our friends and fellow businesses at the Maldon Christmas Fayre!

We’re so excited to welcome three wonderful local authors for an evening book signing at our bookshop.

From 7pm, Wanda Whiteley, Barrie Jaimeson and Owen W Knight will be in store signing copies of their latest books.

1553. Goldhanger, a tiny fishing village on the Blackwater marshes. Fifteen-year-old Dela’s strange bond with animals has her branded a witch by the locals. Running for her life, with only a rescued dog for a friend, Dela manages to find sanctuary at the palace of Princess Mary. These are dangerous times, with the boy-king Edward on his deathbed and the succession uncertain. Traumatised at first, in an alien world of spies and courtiers, Dela is befriended by a trio of acrobats and players. But when she is drawn to one of them, Fitz, she discovers he holds a terrible secret that promises to tear her fragile world apart.

The second book in the Anne Edwards detective series set in Maldon, Essex.
A body discovered in a ditch under a hedgerow sets Anne and her team off on a journey that reveals underhand goings-on at a local beauty spot as well as revelations about her own officers and herself after a chance meeting with a jogger on the seawall.
Her old friends at The Queen’s Head pub notice suspicious activity down on the Hythe quay leading Anne to more encounters with people she would rather not.
Hooded monks; private schools; Bed and Breakfasts; Glamping; sporty cars and, of course Thames Barges all lead her to uncovering people smuggling and serious abuse.

The Great Reset has begun.

Fourteen years ago, Peter saved the world. Now, his sister Emily and two strangers receive coded invitations to return to the hidden village of Templewood, where Peter faces a new, terrifying threat. Templewood is home to the Sect, a secretive organisation intent on global power. They have infiltrated many Governments and are collaborating with the Visitors: alien invaders who have brought gifts of advanced scientific and genetic discoveries. These gifts will potentially provide enormous benefits for humanity and facilitate the Sect’s bid for power. But at what cost and what is the Visitors’ motive? Why are they taking, then retuning, increasing numbers of the local population? Peter, Emily, and their friends must uncover the truth before their worst fears are confirmed.

Our bookshop will be open all evening for the festivities! We hope you’ll pop by and visit us, and see the fabulous stalls and traders at the Christmas Fayre this year.